Lenses: before, during and after pandemic

We may introduce in this specific order those ophthalmic filters that once were used exclusively for treating vision problems such as low vision and now it is being increasingly considered due to the visual stress caused by hyperconnectivity (enhanced by the pandemic) or futuristic therapies such as Biohacking.

Let´s take as a starting point the very first day of existence. According to book of Genesis in the Bible, God said: “Let there be light”, and there was light. Having said this, we should know that those first beams of light came together with its entire high-energy-blue component.

Millions (or thousands) of years later, scientists Akasaki, Amano and Nakamura were awarded with the Nobel Prize 2014 in Physics, after performing their studies and testing the application of light diodes, LED.
Starting in the early 1990s, white light technologies -with its high blue light component- gradually replaced most light sources, including displays and screens of every digital device that we use in our daily on-line activities.

LED technology contributes to conserving the Earth’s resources, as well as providing an affordable source of light for millions around the world BUT this technology come with a dark side: human brain cannot discern between day and night, between light and darkness.

How does the blue light affect us?

There are three main issues caused by direct exposure to digital devices or other sources of blue light; these effects have an impact on the body in general and particularly on the visual system.

1. Refraction and perception. It is the range of the visible spectrum with highest refractive index, which is why to the emmetropic eye, they refract before reaching the retina causing focus, dispersion and contrasting issues.
2. Photo-toxic effects on the retina. Perhaps this is the most controversial point due to the lack of tests on humans, although the results obtained in animal tests (rodents) have confirmed its negative consequences.
3. Circadian rhythm. When the sun sets, it is precisely the absence of blue light what activates the secretion of melatonin which allows our body to start the sleep cycle. The abrupt change from incandescent to LED lighting in all its forms, increased by overexposure to digital devices is causing Health authorities to worry because of their negative impact on sleeping patterns and those repairing tasks that our body perform while we sleep.

This issue was approached by the optical industry in the past.

As early as 1938, B&L offered their Ray Ban “shooting glasses” with yellow lenses that highlighted the importance of cutting off blue light to improve vision on cloudy days, driving in foggy weather, shooting practice and night vision. 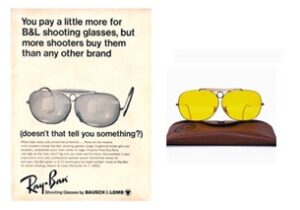 Turquoise-blue light is beneficial… only in daytime.

As we mentioned before, the rise of LED light with a high component of blue light in public lighting, mobile devices, and all type of screens, would be confusing our brain by delaying the melatonin secretion.
Although we know that just as the blue-violet light would be the most damaging one to the vision system and turquoise light is the one we need to remain active during the day, the fact that we keep on receiving this kind of light during night hours might be counterproductive.

Today, lenses are being offered according to their spectral cut-off to use at different times of the day to reduce the impact of blue light on the circadian cycle:

• 420 cut-off filters: this is the most demanded technology in recent years and showed a notorious increase during the pandemic. They filter all harmful blue violets up to 420nm; therefore, they also guarantee a 100% UV cut. They are also clear hence they do not alter color perception and can be always used and in all areas.
• 450 cut-off filters (yellow): These types of lenses guarantee a cut-off of blues up to 450nm. They allow the pass of turquoise blues but affect our color perception.
• 527 cut filters (orange): they guarantee a total cut of blues in all ranges. Regarding the circadian rhythm, it is recommended for after sunset only, since the blue color during the day is necessary to keep us active. These were the first filters to be considered by the science community when sleeping problems and screens in our lives became a subject of study.
• 600 cut-off filters (red): some alternative therapies support them as a way of removing all traces of blue and even green colors during the last night hours to keep the pineal gland up and running. But those who ever worked with filters and know how a 600 filter works, know that, besides some pathologies or some cases of extreme photophobia, this filter and its low transmissibility makes it not very suitable to our vision system.

In conclusion, for those ECP’s involved in low vision and / or safety filters, the acquisition of these types of filters are essential and to the optical industry in general to assure its continuous supply.

LatAm Optical LLC is a Miami-based company that supplies finished and semi- finished lenses, optical equipment and consumables for the optical industry in Latin America and the USA. 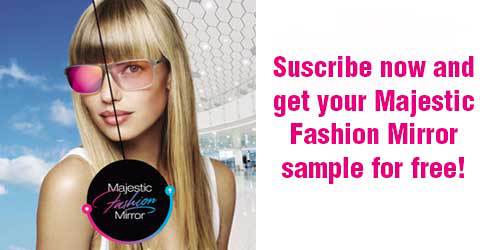