About three-in-ten U.S. adults say they are ‘almost constantly’ online

Three-in-ten U.S. adults say they are ‘almost constantly’ online. As smartphones and other internet-connected devices have become more widespread, 31% of U.S. adults now report that they go online “almost constantly,” up from 21% in 2015, according to a new Pew Research Center survey conducted Jan. 25 to Feb. 8, 2021.

How we did this

Adults under the age of 50 are at the vanguard of the constantly connected: 44% of 18- to 49-year-olds say they go online almost constantly. By comparison, just 22% of those ages 50 to 64 and even smaller shares of those 65 and older (8%) say they use the internet at this frequency. 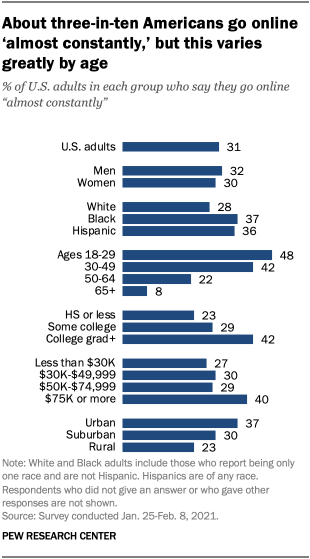 Other demographic groups that report almost always going online include college-educated adults, adults who live in higher-income households and urban residents.
Some 42% of adults with a college degree or more education go online almost constantly, compared with 23% of adults with a high school diploma or less education. At the same time, the shares of White, Black and Hispanic adults who report using the internet almost constantly are statistically the same. Some 37% of Black adults say this, while 36% of Hispanic adults and 28% of White adults report going online on an almost-constant basis. The share of Hispanic adults who are almost always online has risen 17 points since 2015, while there has been no growth for White and Black adults during this time period.

While 40% of adults with an annual household income of $75,000 or more say they use the internet almost constantly, this is true for just 27% of those living in households earning less than $30,000 a year. Adults who live in urban areas are the most likely to say they go online almost constantly, compared with suburban residents and an even smaller share of those who live in rural areas.

CORRECTION (March 2021): A previous version of this post incorrectly listed partisan affiliation as a way in which the survey is weighted to be representative of the U.S. population. None of the study findings or conclusions are affected.

Note: This is an update of a post originally published on Dec. 8, 2015, and later updated on July 25, 2019, by Andrew Perrin and Madhu Kumar. Here are the questions used for this report, along with responses, and its methodology.

LatAm Optical LLC is a Miami-based company that supplies finished and semi- finished lenses, optical equipment and consumables for the optical industry in Latin America and the USA.